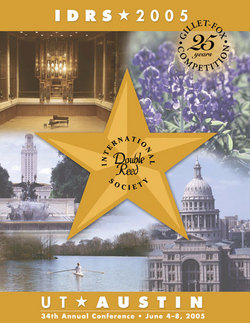 ————————————————————————-
Invitation to IDRS 2005 UT Austin
Greetings from Austin,
We invite you to join us for the 2005 Conference of the International Double
Reed Society at the University of Texas School of Music. With a variety of
unique programs and special features, this conference promises to be an
extraordinary series of concerts, workshops, and master classes. In
addition to the extensive exhibits of instruments, accessories, music, and
recordings, the 5- day event will feature some of the world¹s leading
performers on double reed instruments, as well as many of our most
celebrated teachers. We will commemorate the twenty-fifth anniversary of
the Gillet-Fox Competition with special performances by many former winners.
We will also celebrate our friends for whom music is an avocation with a
unique Avocational Music Series, and a round-table discussion on the topic
of making a life ­ but not a living ­ with music.
Hosting the 2005 IDRS conference, UT Austin is the largest state university
in the United States. Programs and exhibits will be held in UT¹s School of
Music and the adjoining UT Performing Arts Center, boasting a variety of
excellent recital and concert halls. Also on the UT campus are a wide range
of world-class museums and libraries, including the LBJ Library, the Blanton
Art Museum, the wonderful Museum of Texas History, and the world-renowned
Harry Ransom Center, all available for your enjoyment.
The city of Austin, known for its playful and offbeat nature, is the
playground of Texas. Situated at the center of the Lone Star State, it
stands as the gateway to the Texas Hill Country and the Highland Lakes. As
the state capital and home to the University of Texas, the city supports a
politically charged and culturally rich environment. It’s hip, trendy, and
high-tech. A large creative population-primarily musicians and
artists-enhance its eclectic nature.
Also, the Artistic Committee of the 2005 Annual Conference of the
International Double Reed Society at The University of Texas at Austin would
like to request that any individual or group interested in appearing at the
conference submit a proposal in writing.
There are three tiers of presentation options available to participants of
the IDRS 2005 conference. These tiers include: The Artist Recital, Lecture
or Master Class Presentation, and as a new addition, The Avocational Series.
The explanations of these tiers are included in the attachment, as well as
links to the appropriate application forms.
Please keep in mind that proposals are due December 15, 2004.
Thank you,
Kristin Wolfe Jensen and Rebecca Henderson
Hosts IDRS 2005 UT Austin
———————————————————————